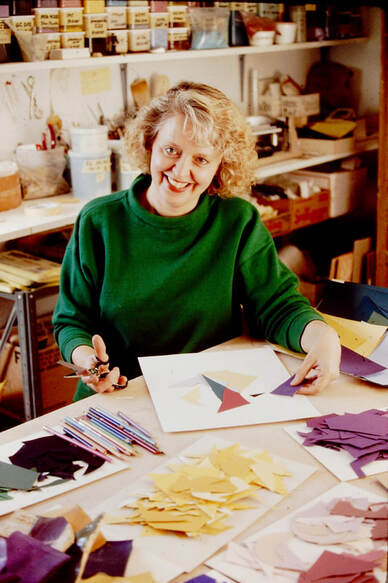 ​
Jeanne Otis received her BA in Fine Arts from DePauw University, Greencastle, Indiana, her BFA in Ceramics and Painting from Denison University, Granville, Ohio, and her MFA in Ceramics from The Ohio State University, Columbus. She worked as a Professor of Art for 30 years at Arizona State University, Tempe. Previously she has taught at San Diego State University; and been Guest Artist at both Idyllwild School of Music and the Arts, California and Arrowmont School of Art and Crafts, Gatlinburg, Tennessee. Otis has received large scale corporate commissions including the Hughes Aircraft Corporation, Los Angeles. Her work is included nationally in private and permanent collections. She has received several grants for her work and research with ceramic color, which have been published in books, publications, lecture panels and workshops including "Innovative Glaze Development," a lecture panel and slide presentation at the National Council for the Education of the Ceramic Arts Conference, San Diego.

Otis states, "My work is a continuous dialogue with color, especially the quality of color that is unique to ceramic materials. The works themselves have evolved from visual ideas I pursued as a painter earlier in my career. Over the years, their conception has become more architectural, relying on the interplay of actual and illusory depth with color and the rich nuances of light, shadow, and transparency." She further states, "The choice to use glaze, underglazes, or colored slip is a simple concern for the relationship of one color, texture, or surface next to another in an effort to solidify my personal color preferences and my responses to the southwest environment." Her selected solo exhibitions include: New Wall Sculpture by Jeanne Otis, Taboo Studio, San Diego, 1993; Jeanne Otis: Clay Color/Works, Grossmont College Art Gallery, El Cajon, California, 1987; Jeanne Otis: Color Dialogue, The Hand and the Spirit Gallery, Scottsdale, Arizona, 1984; and Jeanne Otis - Woman's Work, Triad Gallery, San Diego, 1975.

From ASU Now 2003:“Ceramics Faculty Selects the Best of the Best for Summer Exhibition”
The Ceramics Research Center at the ASU Art Museum will kick off new summer hours with the pick of its collection in an exhibition that runs June 7 – Sept. 14, 2003. Ceramics Faculty Selects: Clay from the Permanent Collection consists of 36 works chosen from the center’s 3,000-piece collection by the Herberger College’s three ceramic faculty members, Kurt Weiser, Randy Schmidt and Jeanne Otis. Weiser, Schmidt and Otis teach in the Herberger College’s ceramics program, which was recently ranked 14th in the country by U.S.News & World Report.
​
The Herberger School of Art’s ceramics faculty – Kurt Weiser, Randy Schmidt and Jeanne Otis – have nearly a century of combined experience as artists and educators. In addition to the selected works, each faculty member will have one of their own art works on exhibit to illustrate their personal work.

Weiser, Schmidt and Otis teach in the Herberger College’s ceramics program, which was recently ranked 14th in the country by U.S.News & World Report. They have diverse backgrounds, concepts and technical skills in the ceramics field, which are reflected in the works selected for this exhibition.

Curator of ceramics Peter Held said that the size of the ASU Art Museum’s collection made the process of selection a rewarding but somewhat daunting task. “The end result mirrors the diversity of the permanent collection, which is used as a teaching tool for many of their students,” Held said.

Jeanne Otis’s background and training as an artist began in painting and drawing, and color continues to be important in her ceramic work. She also is drawn to artists with a painterly quality such as Toshiko Takaezu, Betty Woodman and Jun Kaneko. In addition, she is attracted to the unexpected in functional forms, such as the work of Anne Hirondelle and Phil Cornelius, who incorporate a strong sculptural element in their work.